As the rest of the US took a holiday, so did I.  Here is your Monday Suds a little late. 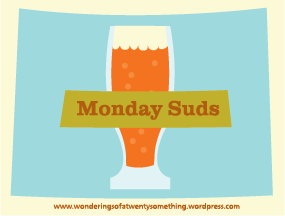 In case you didn’t know, there is so much more to do on the central coast of California than wine.  There is also beer!  One of our favorite stops on the trip was to Lagunitas Brewing Company in Petaluma.  I have had their beers bottled at home and we tried them at the Wine and Seafood festival.  It was such a treat to visit their very busy but super cozy tap room.

The Husband and I ordered an Around the World tray so that the family could zone in our the favorite styles.  The around the world including everything that they had on tap at the moment.  I believe there were 14 or 15 the Sunday we were in.

After a lovely taste in a comfy adirondack chair in the sun, I headed in to the bar area to hunt down some answers about Lagunitas.  I was met by a very friendly Jason.  Jason has been with Lagunitas for about 1.5 years and was more than happy to help me pick my next beer and answer some questions.

As you can see, this brewery has a lot going on and lot on the horizon.  They have been brewing in California since 1993.  And if you can’t make it to California, they are about to break ground on a new facility in Chicago.  Sounds like the restaurant is going in first so that you watch your brewhouse being built!  Hopefully I will get too see it on a trip home.

The flagship beer that is on tap is the IPA.  There are so many ingredients in this beer, your tongue will be doing somersaults to try and catch them all.  Relax and enjoy every taste and if you don’t catch them all, have another mason jar and try again!  I forgot to mention that there aren’t any pint glasses here, just jars.  Definitely fit in with the relaxed vibe.

Another treat I was able to try while at the bar was the Day Time.  This beer was a fractional IPA and was a new style to me.  This has an alcohol level of 4.65%.  Day Time still carried all of the notes of the IPA with a more refreshing and light aftertaste.  Great beer for the weather we are having!  It’s a great transition from light Summer beer to aromatic Fall beers.

If you are looking for Lagunitas, they ship to a fair number of states and you should be able to track it down in your local liquor store.  We really enjoyed the whole experience at the place.  Everyone was friendly and the beer was great!  Don’t forget about the beer when you stop by wine country.