So most breweries are in small industrial areas and you have to be sure where you are going.  As we headed towards Strange, we weren’t quite sure where the GPS was taking us but then, in a small building we saw a buzzing garage door and a full parking lot.  We found it! Sunday afternoons are usually a great time to visit a new brewery because you get some regulars and not quite a full house.  That wasn’t the case at Strange.  It may have been the great weather, the good beer, or the closed room but it was packed!  We cozied up to the bar and got tasting!  The brewery, like many breweries, was opened by two friends who wanted to make a living doing what everyone wants to do, brewing beer.  Strange was opened in May 2010 and they haven’t looked back!

FYI, some of my favorite tap handles are here!!  Wouldn’t this be cool with a short last name?  Pinterest, anyone? 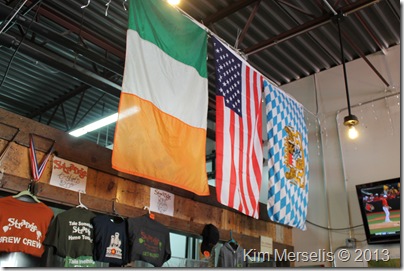 Nothing fancy here, just a converted warehouse with some tasty beer inside.  Do you need anything more?

As the name indicates, some of the beers had a strange taste but not strange in an unpleasant way, just an unexpected way.  The beer that almost seemed like a  “I dare you to drink it beer” was the Zora Rosemary Pale Ale.  I imagine this beer is something that would be a hit at a beer pairing dinner with some tasty lamb dish!  There was a nose and slight hint of rosemary but the pale ale base carried it through.

The top selling beers according to our host for the day, Lila, are the 1000 Barrel Imperial IPA and the Le Bruit du Diable Farmhouse Ale.  I tried both but neither were up my alley.  We of course switched to our standards to get a good feeling for what was going on.  The Pale Ale had a great flavor that I think would make a great base for plenty of summer flavors or even a shandy mix!  (Currently trying to concoct the perfect Shandy.  Let me know if you have any favorites!) The Maibock, the Husband’s current beer of choice, was also a malty flavor that didn’t strike me as a beer I would like.  The more I sipped, the more I loved!

What I really like about Strange was interesting beer list. The space itself wasn’t huge but there were plenty of space and flavors for everyone.  Each beer had it’s distinct hops and malts that made them great.  Some breweries have a signature taste but Strange was great for trying plenty of differnt styles (Kriek anyone?) If we were closer, I would be more inclined to try a pint of everything.  I really think that at this brewery, you have to give each beer a pint’s worth of time to figure out what you should really be tasting.

Would you try something that was self proclaimed as Strange?

2 thoughts on “Monday Suds: Are you Strange?”