We moved to Colorado in 2009 and started getting into craft beer in 2010.  While living in Colorado, I have happened upon many brews from Boulder Beer in bottles and on tap but I still hadn’t had a chance to stop in. 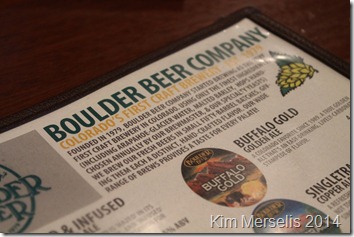 If you are going to try out Colorado beer, it’s definitely important to go to the start of it all!  Boulder Beer Company was opened in 1979 and has the distinction of being the first in the state!

As I read over the menu I found some of my favorites like Never Summer and Hazed and Infused as well as more than a handful that were new to me.  On their (modest) 50 barrel system, they are able to make a beer for every palate (including the competition judges, based on the medals on the wall)!

As you can see, the taster tray was pretty big!  Not only were there a lot of beers but the tasters were pretty generous.  If you want to share a flight with friends, this is a good place to start.  The big tray meant I didn’t have a chance to get a full pint.  I’ve had plenty of pints of Hazed but my favorite of the day was the Sweaty Betty!  This is a year round beer that  I haven’t seen in the Longmont coolers.  It might be time to request it!  It might have been cold outside but this beer tasted like Summer and I could have drank this all afternoon!

Here are the brewer’s notes:

Sweaty Betty Blonde is a refreshing, unfiltered Bavarian-style Hefeweizen. The Weinstephan yeast gives this brew subtle hints of clove and banana with an attractive, hazy blonde color. For the best flavor, rouse any settled yeast by swirling the bottom of the bottle.

Overall, this was a great stop!  I would have loved to be there on a less busy day so I could have gotten some of questions answered but we could definitely tell that this was a Colorado Landmark!